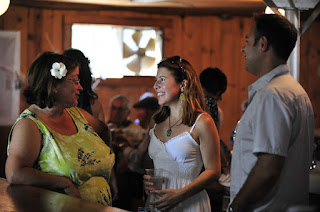 Dialogue. It’s not something we tend to think about much. We just do it, and fortunately it comes naturally to most of us. But are we really that good at it? Do we think about how we go about conversing with others and whether or not our typical style of communication is actually constructive? Dialogue is important for many reasons, to a large extent because we build relationships through it.

When communicating with someone, do you have to win them over, do you prefer coming to a consensus, or do you often just agree to disagree? Are you an antagonist, pacifist, or reside somewhere in the middle? Do you bounce back and forth, pinging to the edge and then back again? Or do you allow for synthesis to unfold, a third possibility coming to the surface when conversing with someone else? What about your internal dialogue? Are you aware of how it brings even more people into the discussion, how important perspective is, and how multiple perspectives can exist in any given conversation?

Yeah, there’s a lot there when you hold it up to the light.

Personally, I think my style depends not only on with whom I’m talking, but also what we’re discussing. Is there passion in the opinion from the get-go or a conflict already in existence? Are we aware of what the issue is and how we’re feeling about it? Are we on the same page and communicating on the same level? It’s not always easy to tell, and can in fact make relating seem like a science.

Communication with particular people can be highly delicate at times, vacillating between harmonious and volatile. With others, however, conversations may feel downright effortless. So what’s the magic equation for relating? There might be a whole slew of theories and equations, ranging from simple addition and subtraction to complex calculus-like brainteasers.

Most of us would rather communicate clearly and easily – and let’s be honest – not have to think so much about it. But not always seeing eye to eye isn’t necessarily a bad thing and doesn’t have to mean that we’re disagreeing. We each simply view things from our own perspective. Sometimes the exchange ends in agreement, while at other times we’re left with open-ended questions.

“There just isn’t always going to be a resolution,” Stephen says. “Some things aren’t going to work out.” Besides, he adds, “I’m always suspicious when things are too tidy. When I think I have it all figured out, I know I’m getting close to disaster.” He chuckles.

Seated in our cushy chairs, we both look out the window at McKinley Park just across the way. Sometimes I think we’re speaking different languages, but the intention for communion is there, and so that’s usually what we get. Engaging in the act of communication means we have relationships – and that’s a great thing – but as we all know, relationships can be challenging. Dialogue-ing is a process, just like most everything else in life. It requires awareness, practice and patience, repeatedly.

“I always prefer the peripatetic style of dialogue,” Stephen continues, as I give him a perplexed look he’s probably used to by now. “This is when you walk and talk, rather than flying around or being stuck.” I know the style; just hadn’t heard the word before. “You’re not so fixated on body or mind, and the rhythm from the movement helps relax and open you up.” Makes perfect sense to me. “You don’t feel confronted by another or confined by the walls or the room. Walking helps you balance internally because you’re literally going back and forth on two feet.”