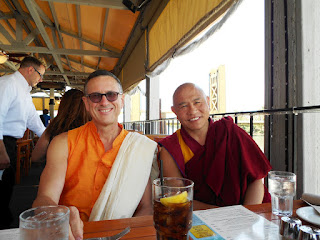 The wine cellar of 58 Degrees is a long brick room with a black sleek table in the middle and modern-style candelabra chandelier overhead. A variety of paintings hang on the walls, including an abstract city scene, a bold Impressionist vineyard landscape, an ethereal undersea-scape and a humorous Olde English golf course scene. The lighting is just low enough to be romantic but high enough to be practical. The room is cold.

Immediately upon sitting I begin to experience an otherworldly feeling, as if I’m floating and could fall into a deep trance any minute. The combination of company seems odd to me, and there’s a strange rift between the ambiance of the place and the particular feelings I’m experiencing.

Guests include a Buddhist teacher/Psychotherapist, a founder of the Dalai Lama Foundation, a writer/photographer, the City Manager, a disciple of His Holiness the Dalai Lama, and several of his students. English is not the majority’s primary language at the table, but it is what is spoken most. There is an interpreter aiding conversation between the English and Tibetan-speaking people.

Conversations include the difference between Tibetan Buddhism and Chinese Buddhism, Unsung Heroes, Dharamsala, Shugdens and the Dalai Lama’s view of them, intelligent vs. dull disciples, Buddhism and quantum physics, Dick Grace’s involvement with the Dalai Lama, and a question that remained unanswered: “What is reality?”

The weather is nearly perfect – sunny and bright, a little warmer than body temperature, and with a breeze that makes its presence known without causing any trouble. I park at the far end of Old Sacramento, near the new Riverfront Promenade, and begin strolling toward my destination. The Promenade is inviting, running someplace in the distance from the south, and connecting with the Old Sacramento merchant dock. There are plaques along the way telling of Sacramento’s early history – transportation, bridges, the railroad, and such. The Tower Bridge, which connects Sacramento to West Sacramento, glistens in the sun like gold (as it should but doesn’t always do), and there’s a long sailboat tied to the dock beneath it. People are walking and jogging the Promenade, and a young businessman is perched on a bench talking on his cell phone.

I take some photos along the way and ingest the unhurried scene as I come across my lunch destination, Rio City Café, which overlooks the Sacramento River. Our waiter Peter seats me at a long table at the far end of the large patio space and I await the group’s arrival. I turn to see the red and gold robes some distance behind me taking photographs on a veranda off the same wooden-plank promenade. They soon disappear, a few minutes later appearing before me.

I’ve met them all before – three years ago and some change – but one never quite knows how to greet holy people, and I fumble in my own ways as usual. Still, they are cordial, casual and good at coaxing smiles. There is a language barrier and no interpreter this time, which could account for the more informal conversations. A large pelican is spotted on a pylon in the river, and then a couple on a jet ski that appears to be having engine trouble. We all peruse our menus and find very few vegetarian options, but luckily the monks love Italian food.

Jhado Tulku Rinpoche travels the world giving dharma talks and dispensing peace-inducing wisdom, called “loving kindness”. His smile emanates warmth and accessibility like a grandfather who effortlessly teaches you what no one else can. He says that it’s very nice in Sacramento, and talking about his travels mentions that Cape Town is a lot like Santa Barbara. We snap pictures with my tiny pocket camera – Geshe Tashi and I taking turns, while Janine and one of Rinpoche’s students take turns with her mega-sized one as well. Jhado Rinpoche flashes a smile and raises his hand, giving the peace sign to the 5-inch lens.

As former abbot of the Dalai Lama’s private Namgyal Monastery in Dharamsala, India, Rinpoche is a highly esteemed Lama in the Geluk tradition. He is known for his gentle demeanor, dynamic teaching style, and ability to engage western students. His weeklong visit to Sacramento last week included public talks and dharma teachings, all free and open to the public. The underlying theme of his visit was to impress upon people the need for sacred space in Sacramento, which is one of Lion’s Roar Dharma Center’s loftiest and meatiest missions.

What exactly is the vision? We’ll discuss the lay of that (holy?) land next time…