When It’s So Absurd You Just Have to Laugh 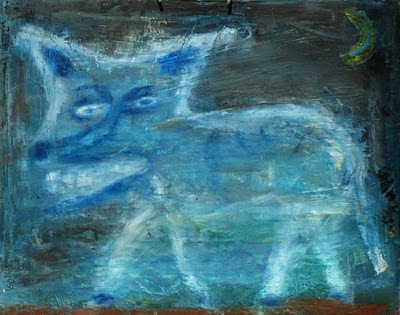 In keeping with the theme of our last blog entry – and because we aren’t sure if the rash of unfortunate events surrounding our marketing postcard has fully subsided yet – we wanted to delve a little deeper into mischievous mythological territory. Speaking of Leprechauns and Menehune and volatile little things that never fully show themselves, Stephen brought up the Trickster archetype and “things that can go either way in life.”
What exactly is a Trickster, anyway? Loosely I knew what it meant, but was curious to uncover more, especially because I’d felt I was at the butt of several of its recent antics. And I wondered where exactly it originates from – whether the individual’s psyche, the collective conscious, the powers that be, the creative life force itself, or something I couldn’t yet comprehend.

Reading Trickster Makes This World: Mischief, Myth & Art by Lewis Hyde, if I had to choose one word to describe the Trickster, I’d say it equates with “uncertainty”. And isn’t that one particular word we tend to find hard to swallow in life?
The trickster symbolizes “the playful and disruptive side of the human imagination” as it is embodied in mythology. This makes sense to me. But Tricksters as “indispensable culture heroes”? I didn’t yet see it.

In North America, the Trickster is represented by the Coyote, in West Africa it is called ‘Eshu’, in Greece Hermes the Thief is the scapegoat, and to the western world Mercury (as in Mercury retrograde) is both trickster and teacher. Of course there are more: Raven, Vampire, Fox, Dragon, Joker, Jester, etc. What the Trickster has in common: It creates ambiguity and messiness to make this life imperfect. It is “the wild, creative genius that breaks up static institutions and saves humanity with archetypal merriment” (Robert Aitken). Aka, “subversive innovation”.

The Trickster represents confusion, blurred lines and space, that which is un-certain; leaving us always a little bit on edge. Tricksters are boundary crossers, boundary keepers and boundary changers. We create boundaries – because they make us feel safer – and Coyote or Eshu comes along in the night and moves the markers.
Tricksters are voracious wanderers whose appetites are never quite satisfied and whose home can be likened to the wind itself. Curiously, they are mostly male. In this regard it can be surmised that the world’s cultures mainly recognize the Trickster as male because they cannot give birth and therefore cannot become confined or defined by their own creations.

In a paradoxical sense, Tricksters act as “creators of culture” by stealing gifts from the heavens and giving them to humans. And yet they also break down certain rigid parts of that very culture. When you view this in a big-picture way, they “continue to keep our world lively and give it the flexibility to endure” by “uncover(ing) and disrupt(ing) the very things that cultures are based on.” The Trickster, according to Jung, is an aspect of the shadow archetype, at least in its negative traits. It has the ability to… “play havoc with the hyper-rational personality and community.”

Although unwelcome annoyances at times, the Trickster is not seeking to do harm for the sake of doing harm itself. He recognizes that good and bad go together ; that yin and yang make a harmonious paradox, a paradoxical harmony, an eloquent contradiction that is just life itself.

In the highest sense, Tricksters “open the road to possible new worlds.” And although there are consequences to this, if we try to bind, suppress or deny the Trickster, even worse consequences will likely ensue. There is simply no sense fighting a strong current that will eventually get bored or distracted by some greater endeavor and move on. Trickster is a natural part of life, in order for life to go on creatively and free itself from the rigid forms a society tends to create. Frustrating as the tricks can be, little bits of freedom along the way are the ultimate gifts.

In reading the descriptions and discussions on the Trickster as portrayed by Hyde, I realized I like the Trickster and have some trickster in my blood myself. So does that mean I caused all those disruptions to our project? Or that I should simply honor the Trickster’s motives… which were…. well, who ever really knows?! To keep my eyes open to new ways of doing things? To not be trapped by expectation – my own or others’? To not take it all so seriously? To let myself fail? To let the Trickster in me come out to play? To let go of the outcome because I was too invested? Or Maybe there just became too many different sets of ‘rules’ I had to play by with this project, and maybe Hermes stepped in as one obstacle after another to get the ball rolling another direction.

Pondering the Trickster mythology makes me think of clowns… how adverse many adults are to them. I always assumed it was simply because clowns tend to have an appearance that unnerves us. But clowns also engage in activities that make us uncomfortable. For instance, they wear a “mask”, so to speak, and we don’t like when people hide behind things because we can’t fully see what we’re in for. Clowns also tend to pull foreign objects out of their sleeves or our ears, and we don’t like these little annoying surprises. But is the clown really just a trickster in human form, someone who teases us just enough to get a rise out of us, maybe hoping we’ll relax, let go, and laugh at ourselves? And what happens if we actually stop to partake in some nonsensical play? Will it all come crashing down or perhaps vibrate the unused china just to the edge of the hutch?

The answer to that, says the Magic 8-Ball, “Reply hazy – try again.”